​Beyond its reputation as the world’s beauty capital, L.A. is known for its excellent shopping, fine dining and haute culture. Having spent considerable time exploring the city, I wrote this insider’s take on what to do, where to go and how to take advantage of the City of Angels. 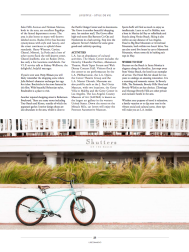 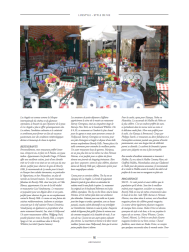 “Los Angeles is known best as the international Mecca for film and glamor, however, beauty is only skin-deep, and L.A. has more to offer than that. Culture, culinary ambition and creativity meet to form an exciting vacation spot with divine weather and much to explore.

My personal favorite restaurant (anywhere, as a matter of fact) is Il Pastaio, an Italian gem. Owned by the Drago family, Il Pastaio boasts delicious food and a fine clientele on a not-so-inconspicuous corner in Beverly Hills. I recommend going there for lunch and trying their amazing salads, especially the Vegetariana, and their Mezzelune, a homemade lobster ravioli dish. Another fabulous Beverly Hills restaurant just around the corner is Villa Blanca, owned by reality TV star and restaurateur, Lisa Vanderpump. The restaurant is popular for its stylish décor and patio, perfect for people watching due to its central location in Beverly Hills. The menu is a fusion of Mediterranean, Italian and Asian food concocted by Executive Chef Francis Dimitrius. Vanderpump also co-owns another trendy restaurant, Sur, located in Hollywood. Another celebrity restaurateur, Wolfgang Puck, owns several Beverly Hills staples, including Spago and steakhouse Cut in The Beverly Wilshire (a Four Seasons hotel).

Power breakfasters will enjoy the morning scene at Barney Greengrass Restaurant, situated on the fifth-floor of Barneys New York on Wilshire Boulevard. Open at 8:30 a.m., this restaurant is the hottest place for agents and other Hollywood’s who’s who. Barney Greengrass is known for its sturgeon and bagels and has a beautiful terrace overlooking Beverly Hills. Sit at the communal table to overhear the best gossip. Another upscale restaurant, Mariposa is just down the street in Neiman Marcus, and perfect for refueling during a day of rigorous shopping. Though their popovers are most famous, many Beverly Hills ladies who lunch opt for their stellar salads.

Known for its celebrity diners, The Ivy is an L.A. classic. The gaggle of paparazzi waiting outside for A-listers makes the restaurant easy-to-spot. The original Ivy restaurant on Robertson Boulevard is most famous, however, The Ivy on the Shore, situated in Santa Monica, serves the same fare in a more relaxed setting. Waiting for a table on the patio can be a long haul; however, with its beautiful umbrellas, colorful decorative cushions and prime view of the entrance/exit, it’s worth it. Try the Grilled Fresh Vegetable Salad (I like mine with Mesquite shrimp) and the corn chowder. Just around the corner, Cecconi’s is another, newer dining option. The food is good and the décor even better (think Old Hollywood), though service can be sub-par.

For sushi, opt for Katsuya, Nobu or Matsuhisa. The Malibu location of Nobu is the most famous. It is a star-studded affair specializing in miso black cod and delicious fresh maki. My personal favorite for sushi is the Brentwood location of Katsuya. Designed by Philippe Starck, this restaurant has a fabulous décor and exciting atmosphere with a beautiful line-up of guests punctuated by A-list celebrities. The yellowtail sashimi with jalapeño is to die for.

Many excellent restaurants are found in Malibu. They include some in The Malibu Country Mart, Geoffrey’s Malibu, Moonshadows and Gladstone’s and Duke’s for great fish. I recommend driving to Malibu before the sun sets and enjoying the view while dining alfresco.

90210 – the zip code is as famous as the people it houses. Though not the end-all for shopping, socializing and dining, Beverly Hills is certainly top of the list. Saks Fifth Avenue and Neiman Marcus, both in the area, are excellent flagships of the famed department stores. The area is also home to many well-known labeled stores. Rodeo Drive has become synonymous with style and luxury, and the street continues to uphold those standards. Harry Winston, Cartier, Chanel, Missoni, La Perla and a host of other stores flank the well-known street. Chanel Joaillerie, also on Rodeo Drive, has only a few locations worldwide. For V.I.P. service talk to Sidney Wellborn, the delightful, helpful manager.

If you’ve ever seen Pretty Woman you will likely remember the shopping scene where Julia Robert’s character exchanges her rags for riches. Boulmiche is the store featured in this film. With beautiful Bohemian styles, Boulmiche is a place to visit.

Another reputed shopping street is Robertson Boulevard. There are many stores including Tory Burch and Kitson, outside of which the paparazzi gather. Interior design shops are also abundant in the area, which is close to the Pacific Design Center and its showrooms. The Grove is another beautiful shopping area. An outdoor mall, The Grove offers high-end stores like Barneys Co-Op and Nordstrom in a lush setting. Step into the adjacent Farmer’s Market for some great goods and celebrity spotting.

L.A. has an abundance of cultural activities. The Music Center includes the Dorothy Chandler Pavilion, Ahmanson Theatre, Mark Taper Forum and Walt Disney Concert Hall. Visitors flock to the center to see the performances by the L.A. Philharmonic, the L.A. Opera, the Center Theatre Group and the L.A. Master Chorale. Museums are also prolific such as the J. Paul Getty Museum, with two locations, the Getty Villa in Malibu and the Getty Center in Los Angeles. The Los Angeles County Museum of Art (LACMA) is known as the largest art gallery in the western United States. Down the street on the Miracle Mile, car lovers will enjoy the Peterson Automotive Museum.

Sports buffs will find as much to enjoy as intellectuals. Learn to surf in Malibu, rent a boat in Marina del Rey or rollerblade and bicycle along Venice Beach. Skiing is also within an easy distance of Los Angeles. Head to Big Bear Mountain or Arrowhead Mountain, both within two hours’ drive. You can also travel five hours by car to Mammoth Mountain, where some ski in bathing suit tops in May.

Shutters on the Beach in Santa Monica is elegance along the shoreline. Just steps away from Venice Beach, the hotel is an exemplar of service. The Hotel Bel-Air closed for two years to undergo an amazing renovation. It is a stunning and romantic retreat. In Beverly Hills, The Peninsula, Beverly Hills Hotel and Beverly Wilshire are key choices. L’Ermitage and Montage Beverly Hills are other private and exclusive hotels in the area.

Whether your purpose of travel is relaxation, a family vacation or to dip your toes in the vibrant social and cultural scene, these tips will make you an L.A. insider.”

Originally published in Urecommend Magazine, August 2013, in English and French.